After four days in Kumbakonam and soaking in all the sights, architectural wonders, ancient temples, the fables around them and the wonderful people, I decided to go to Gingee. It is pronounced as Senji, and I was confused. I never heard of this place before my friend asked to me visit this place. It was quite a distance from Kumbakonam. I took a bus to Chidambaram and got off at the famous Natarajar temple. I had a quick darshan and got the next bus to Villupuram, where I got another bus to Gingee, and it was after midnight when I reached my destination. I found a small lodge and retired for the night. It was pretty late when I woke up the next day, after the arduous bus journey. I could see one of the forts from my hotel window, and I was totally fascinated to see the ramparts of the fort and its raw beauty.

I had a quick shower and after breakfast, I took an auto to the Rajagiri Fort. It is just less than two kilometres from the town.

The Gingee Fort is under the control of the Archaeological Survey of India. There is a small office and not much could be understood about the fort from the ticket seller. It was around 11 am and it started getting warmer, but thankfully for the previous night’s rain it was relatively cooler for the month of June. I came across a board which just pointed out the various structures in the fort complex. As I walked into the massive entrance, I could see the indomitable hill and the fort on the top.

The Gingee Fort complex is on three hillocks: Krishnagiri to the north, Rajagiri to the west and Chandrayandurg to the south-east. The three hills together constitute the fort complex, each having a separate and self-contained citadel. The fort walls are 13 km and the three hills are connected by walls enclosing an area of 11 square kilometres. The Rajagiri Fort is built on a hillock about 900 feet tall and protected by an 80 feet wide moat. On the top of the hillock, there are minor fortifications. The Rajagiri hill was of more strategic importance compared to Krishnagiri hill. At the foot hills, there are two granaries with vaulted chambers, the royal living quarters, a magazine storage facility, the audience hall and chamber in Indo-Islamic style.

There is a canon like structure in front of the palace called the King’s “ammi” (a small stone used to grind herbs in households) by the locals. The Kalyana Mahal (Marriage Place) of Rajagiri hill is a pyramidal dome on a four storied rectangular open air structure. There are terracotta pipes to keep the place cool even during the peak of summer. The other structures are gymnasium, granary, barracks, the mosque of Mahabut Khan and a royal harem for all the wives and concubines of the ruler.

It is an arduous trek to the top of the citadel. I almost gave up midway to the fort, but the promise of a beautiful vista on the top kept me going.

There were very few visitors as it was a weekday, and a few went all the way to the top. The monkeys (Bonnet Macaques) are used to the visitors and try to snatch anything that is in a plastic cover. It is advisable to carry food and water in a backpack. Keep your bag and camera close to body and be wary of these overenthusiastic monkeys. The trek took uphill took about 2 hours and I came to the final leg of the climb, which is a drawbridge that connects the citadel.

On the top you can see the sprawling plains and the other two forts. One of the interesting views is that of the Venkataramana Temple.

The other structures in the citadel are; a temple for Kamalakani Amman, a smaller granary, a lookout tower and living quarters.

No wonder Chhatrapathi Shivaji considered the Gingee Fort to be most impregnable fort in India. 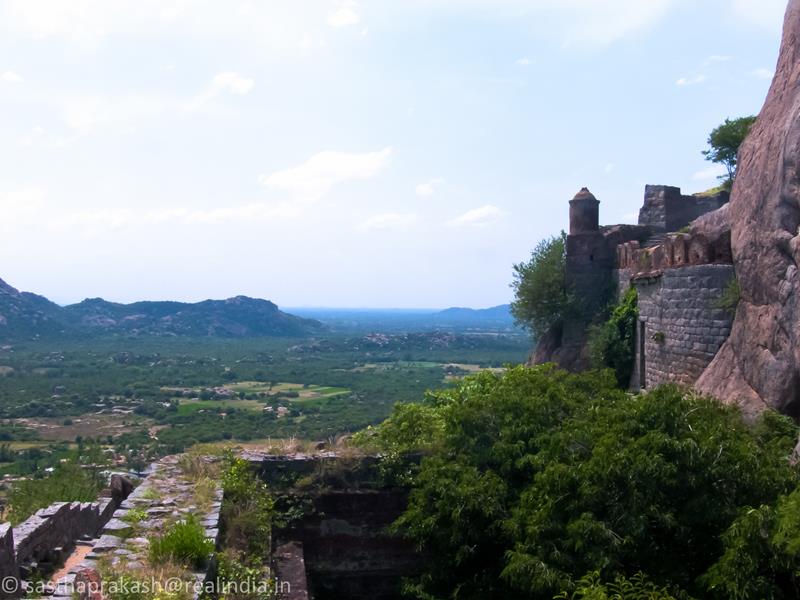 After spending an hour on the top, I slowly descended the fort. The walk down to was equally hard and it was really tough on my knees. I did not expect such a climb and was not prepared physically for this trek. I got to the bottom of the fort and had a long drink of water. It was about 4 pm and got an auto-rickshaw back to the town.

A few things to consider before taking this trek:
1. Carry enough food and water. There are no facilities catering food or water.
2. Be prepared for a tough trek uphill and be physically fit. (Not advisable for elderly)
3. Get there early and start the trek early, as it gets hotter.
4. Take adequate protection against heat.
5. Carry all valuables, food, and water in a backpack, avoid plastic bags. The monkeys can be aggressive.
6. The visitors/trekkers are not allowed to climb to the citadel after 3 pm.

A brief history of Gingee Fort and its occupants:

Jain Saints had dwelt in the hills of Gingee from 2nd century to 6th centuries, as evident by many stone carvings and other evidences of Gingee being citadel of Jainism. Gingee was under Pallava Emperors between 600 to 900 AD. Chozha Emperors ruled Gingee between 900 to 1103 AD. In the stone epigraphs at Aanangur of Athitya Chozhan (871-907) and of Athiya Chozhan II (985-1013) it becomes crystal clear that Chozha Emperors ruled Gingee. Pandya Emperors, Chozha Rulers and Hoysala Kings ruled between 1014 to 1190 AD. Yadhava kings ruled Gingee between 1190 to 1330 AD. It came under Vijayanagar rule from the fag end of 14th century and for 150 years it was under Vijayanagar rule. In 1677, it was under the control of Maratha King Shivaji. In 1690, it came under the Mughals, when it became the headquarters of Arcot. It changed hands to the French in 1750, and then to the British in 1762.

The valour of Raja Desingh: After the rule of Nayaks in Tamil Nadu, the Delhi Sultanate waged a series of battles to gain total control of the Southern lands. They met stiff resistance from a small chieftain. The gallantry displayed by Raja Desingh (Raja Tej Singh) at the young age of 22, against the powerful Nawab Sadatulla Khan of Arcot in a struggle that was hopeless from the outset (Desingh’s army consisted of only 350 horses and 500 troopers, while the Nawab’s army had 8,000 horsemen and 10,000 sepoys) is still talked about in the form of ballets in and around Gingee till date. Raja Desingh was killed in the battle and his young wife committed ‘Sati’. The fortress of Gingee lost its pre-eminent position and political importance within a few years with the end of the Rajput rule.

Photographs and Text by Sastha Prakash for http://realindia.in/