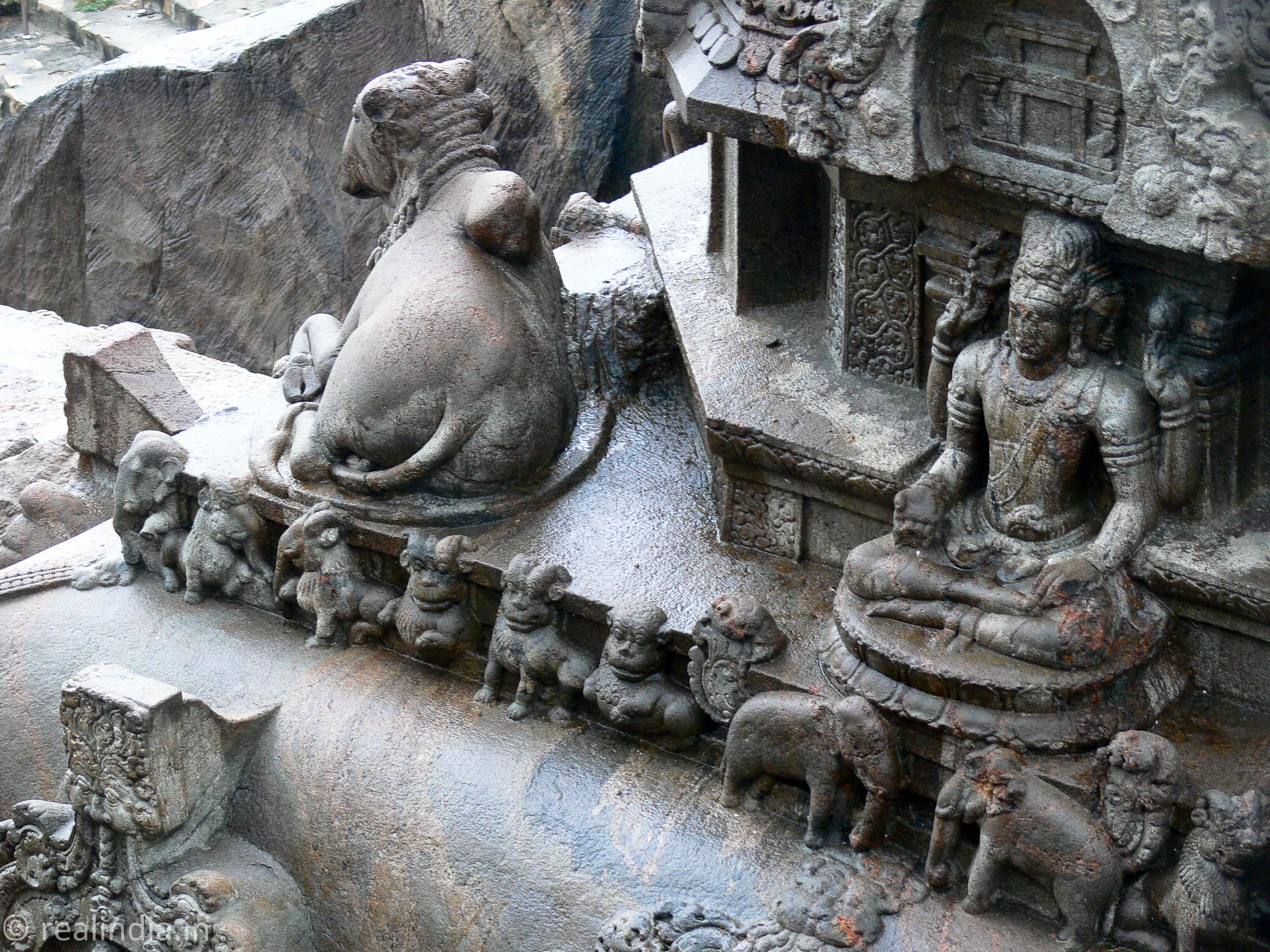 I had previous heard of Kovilpatti and Kalugumalai (eagle’s hill or hill of eagles) in various contexts, but had never been there. I left Madurai and took  a bus to Kovilpatti and reached there by 1 pm or so. I took a room in one of the small lodges near the bus stand area and after lunch started to Kalugumalai, which is about 20 km on the way to Sankarankovil. I was waiting of a town bus to come… a taxi stopped next to me and offered me to drop off at Kalugumalai as the driver was returning to Sankarankovil empty. I took the ride and paid the driver Rs.30/-, which was totally worth it. Beautiful roads lined with trees and in a distance one could see a number of windmills. The driver was a very silent person, hardly a few words were exchanged, I was glad and could enjoy the countryside without any distractions.

Pretty quickly we reached the Kalugumalai town and the driver was trying to take some more passengers for the onward return journey to Sankarankovil… guess it will help him to recover the fuel costs and he had better luck here and found four passengers.

I walked down the road towards the hill, it was a small town with a few shops selling religious items. I crossed the Kazugasalamoorthy Murugan Temple and 400 metres down the road the gate leading to the Jain abodes.

There is a massive pond right in the foothill, but I felt it was artificially created by a stone quarry that existed much earlier.

I walked uphill and it was quite an exercise. I crossed the Vettuvan Kovil enclosure, which was locked and found no one around.

After a few more metres I found a kind old man tending goats… I asked for the Vettuvan Koil watchman… he told me might have left for the day and pointed me a gap in the fence to get inside the enclosure.

We spoke generally about these hills and he told me on most weekdays there are hardly any visitors here except for the locals who come rarely to worship the Aiyannar temple a little further up near the Jaina abode.

I reached the Aiyannar temple and it was a small one with couple of Aiyannar statues (local village guardians deities).

A little further up on the rock face I could see the Jain bas-relief sculptures. I was astounded by the precise and exact dimensions of the sculptures… rows and rows of Jaina deities, Adinatha, Parsvanatha, Mahavira, Bahubali, Ambika Yakshi and Padmavati Yakshi from the 8-9th century CE.

I reached a small cave that was gated and locked. The sculptures were exquisite and it seems to the untrained eye that the open air and centuries of exposure to elements had not dimmed its glory.

I went about taking pictures of them and was reluctant to go down to the Vettuvan Koil (whose magnificence I was unaware). The Jain sculptures are a vital link to our glorious history and the artistic achievements of yore.

Kalugumalai Jain Monastery some facts: This is an ancient Jain site that has a natural cavern with rock beds where Jain monks and nuns observed penance and was an academic center for Jain theology for about 300 years during early Pandya period. An open air rock-cut abode for Tirthankara in three long rows, bas-relief panels of Jinas – Adinatha, Parsvanatha, Mahavira, Bahubali, Ambika Yakshi and Padmavati Yakshi. There are about 150 images sculpted on top of the granite rocky surface similar to several Jaina caves in Anamalai, Alagarmalai, Aivarmalai, Chitaral, Kilakuyilkudi, Tirupparankunram, Uttamapalayam, etc. The prime Jaina deity at Kalugumalai Jain monastery referred to in the inscriptions as Araimalai Alvar of Tirunechuram. The largest donor was Pandya King Maran Sadayan. The monastery became extinct after 13th century due to loss of patronage and the Bhakti movement.

The sky became a bit overcast… and by the time I reached the Vettuvan Koil after crossing the gap in the fence down the hill, it started drizzling. I could take a few pictures from the inner concrete enclosure around the excavated rock and the rock-cut temple.

I was totally mesmerized and was in awe at the magnificence and grandeur of this unfinished temple. The rain got stronger… I ran towards a freestanding rock that provided partial protection from the rain and sat there for about 40 minutes for the rain to abate. The view below was just awesome with the change in weather and with the constant wind and rain.

I let my imagination run wild and thought about the sculptor/sculptors who would taken refuge from the rain in a different era. I was longing for a cup of tea and something to eat preferably some onion pakoras… and my thoughts went back to the journey so far. I was the only person about in these hills, even the goatherd had disappeared… maybe all knew how to read the weather better than me. It was getting late… and was wondering if I will be able to get down to the temple a bit below. After a while, the rain gave up and all that remained was a slight drizzle. I gingerly went down to the temple as the rock steps had become a bit slippery. The rain washed away all the dust and grime, and the stones shone as if they were just sculpted a few hours back.

I could get some wonderful pictures of the intricately sculpted statues and figures, figurines, gods, goddesses and the grand sculpted border designs.

I felt truly elated. It was about 5:15 pm and the skies were darkening again… I reluctantly walked down the hill to the small bus stop and I skipped the Lord Murugan temple. I promised myself I will come again soon. I got a town bus at about 5:40 pm and got back to my room by 6:45 pm. It was a quite an eventful day and the rain poured for another couple of hours into the night… a perfect ending to a beautiful day.

Legend of Vettuvan Koil: The Vettuvan Koil is a stunning piece of art and its beautiful carvings are evidence of the passion that went into its creation. Legend has it that a sculptor was commissioned by the Pandya kings during 8th and 9th century CE, to construct a temple on the foothills of Kalugumalai. The sculptor chose to make a rock-cut temple. The sculptor’s son disagreed on his father’s choice of location and had a serious argument. The son without his father’s knowledge started working on the other end of the hill and matched the chisel stroke with the ones of his father to sound as one stroke. The father soon came to know of his son’s disobedience and the eventual construction, and in a fit of anger the father threw his chisel at his son, which struck the son’s throat and was killed. The son’s work, “Vettuvan Koil” stands unfinished in Kalugumalai.

Vettuvan Koil – Some facts: This is a Hindu cave temple and a freestanding monolithic rock cut temple /vimana. It is about 300 feet in height and the entire hill spreading about 50 acres. This vimana was built during the Pandya period between 8th and 9th century CE. This east facing monolithic rock cut temple is compared with the monolithic Kailasnath temple in Ellora, the temples of Pallavas at Mamallapuram, and the temples of Pattadakal in Bijapur, Karnataka. The sculptors have only completed the roof and two tiers below. The walls and floors including interiors and exteriors sanctum and mandapam appear rough and unfinished. The main sculptures of Mridanga Dakshinamurthy, Narasimha (Vishnu), Siva, and Brahma are truly breathtaking and magnificent. If this temple had been completed, it would have been the best monolithic temple in the Indian subcontinent. The monument is maintained by the Department of Archaeology, Government of Tamil Nadu. The entrance to the monuments is free. Kalugumalai is around 20 km from Kovilpatti. All the buses to Sankarankoil via Kovilpatti will stop at Kalugumalai. Kovilpatti is well connected with Madurai and Tirunelveli.