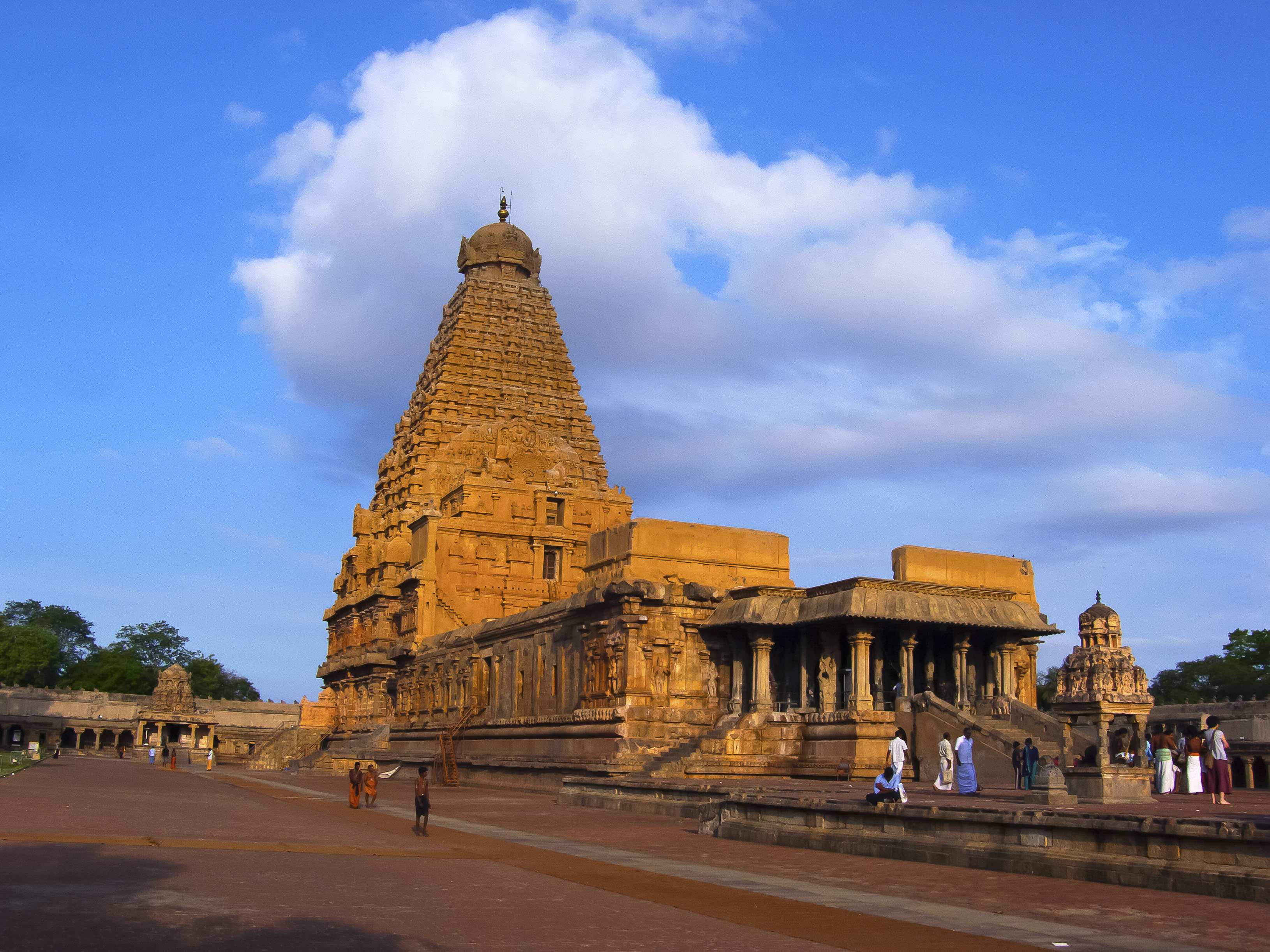 I left Kovilpatti the next day after the dream visit to Kalugumalai, but not before going to the Shenbagavalli Temple in Kovilpatti town. The temple and the precincts had an air of celebration as it was the Tamil New Year. Lots of families, children in new clothes, traders, a huge Ferris wheel, and all the trappings of a South Indian festival could be seen.

I tried getting into the temple to get a darshan, but the queue was almost a mile long. I went about the temple and got back to my room, and left for Madurai and onward to Thanjavur. It was about 8:00 pm or so when I reached Thanjavur, checked into the nearest hotel and called it a day.

Woke up very early and went over to the Big Temple. I learned from experience it is best to visit temples in the mornings, the light is great for photography and everything looks very fresh, and most importantly the Tamil Nadu temples are made of granite and it gets hotter as the day progresses. I had visited Thanjavur in 2008 for a different purpose, but had an opportunity to visit the Periya Koil then. I reached the Big Temple or the Brihadisvara temple (in Sanskrit) and the splendour that awaits you is very hard to describe in words.

I cannot imagine the sheer ingenuity in its design, the audacity of its proportions, and the dedication of the creator of this magnificent tribute to Lord Siva.

Left my footwear in the counters provided by temple administration and walked into the inner precincts. I kept photographing everything that saw and thought I might fill up my SD cards pretty quickly at this rate.

I was approached by a soft spoken man and offered guide services. As I had come here previously and having read so much about this temple, I knew what to expect, but I wanted to know more and agreed to take the service. Mr Raja, the guide, has been taking people around for the past 12 years or so. The first thing he told me was, we are not supposed to take the steps directly to the shrine, but take the side steps when going inside the temple to worship like even the kings of yore did.

As we were approaching the temple, the drums started playing, I was told by the guide today was the flag hoisting for the Chithirai festival and there was a small crowd taking part in the festivities.

The music, the atmosphere, the ambiance, the crowd, the decorations… I wondered this has been going on in slight variations for the past 1000 years, an unbroken tradition. I was awestruck just relating this to the beginnings of this temple.

My guide left me for a few minutes and ran down to partake in the festivities. I recorded a small video of the flag hoisting.

My guide showed me various aspects of iconography and explained the structures… and even showed me bit of Kerala architecture incorporated on the roof.

We went into the temple… the Siva linga is huge and such a beautiful sight. After praying we got down to go around the temple.

The guide explained in detail about the construction and various stages of additions by the succeeding dynasties. Some of them are added in the facts section below.

I was taken around and shown the mural paintings of the Nayaks and some of unique details of the temple.

The guide showed me a very typical European figure craved on one side of the vimana (I was not able to understand fully how it came to being).

He explained to me how the stone sikhara of 81 tonnes was put on the top of the vimana (tower).

The guide took me to the Subramanya temple and to the Chandikeshvara shrine. We completed one complete circle of the temple and he left. I went on to the Nataraja mandapam where the ulsavars were decorated for the evening procession was kept.

Then I went around the temple a couple of more times and took a lot of pictures. The amount of hard work and detail that has gone into making this temple left me astounded and awed. I left the place by around 10:30 am as the late tourists were coming in and the stones were getting hotter in the sun.

Some factual details of Brihadisvara Temple:
*Brihadisvara temple by Rajaraja I was begun in 1003 and completed in 1010 CE and was designed to represent a cosmic structure – the Mahameru.
*The temple is dedicated to Lord Siva represented by a linga (3.66 m high) and named Rajarajesvaramudayar after the king.
*The temple was built in a courtyard measuring 240 x 120 m in the ratio of 1:2 with blocks being bought from a distance of approximately 50 km. The vimana soars to height of 60.96 m and the stone sikhara (8 pieces) at the top weighs 81.284 tonnes.

*The lower circumambulatory passageway in the sanctum has on its walls exquisite paintings of the Chola period, which was discovered in the 1920s.
*The complex has the main temple with five subshrines for Chandikeshvara, Amman, Subrahmanya, Ganesa and for Karuvur Devar, the royal priest.
*There are two mandapas for Nataraja and Nandi. A cloister mandapa runs round the complex.

*The walls and adhisthana (plinth) are covered with inscriptions of Chola, Pandya, Vijayanagara, Nayak and Maratha rulers. From these it is known that numerous endowments were made to the temple by the royal family and the king.

*The niches in the lower wall of the temple depict various deities like Ganesa, Vishnu with Sridevi and Bhudevi, Bhikshatana, Kalantaka, Natesa, Ardhanariswara, Chandrasekhara to name a few. The upper wall carries the figure of Tripurantaka only.

Some factual details on Cholas and Rajaraja Chola:
*The Cholas, the mightiest rulers of south India, at point of time held sway over major parts of South India and Sri Lanka. They also made their presence felt over North India and even South East Asia.
*The Cholas first appear in the written record in a 3rd century BCE rock inscription of Mauryan emperor Ashoka the Great. The Cholas held the east coast of modern Tamil Nadu and the Cauvery delta region. They eventually gained supremacy over other southern tribes in the area, the Pandyas of Madurai and the Pallavas of Kanchi. The empire’s earliest king Karikala ruled about 100 CE is celebrated in Tamil literature, but the empire reached its height under Rajaraja (985–1014 CE), who conquered Kerala, northern Sri Lanka, and in 1014 CE acquired the Maldives Islands.
*Rajaraja’s son, Rajendra I (1014–1044 CE), would continue to increase Cholan power by defeating rivals in southern India and expanding Cholan territory north. In 1023 CE, Rajendra sent his army north toward the Ganges River and defeated the Bengal kingdom of the Pala ruler.
*Rajendra I sent overseas expeditions to the Malay Peninsula, occupying parts of Java.
*Rivalries with other southern tribes would lead to the dynasty’s fall when in 1257 CE, the Pandyas defeated the Cholas.
*The Chola dynasty ended in 1279 CE with the last Chola ruler, Rajendra IV (1246–1279 CE).

Text and Images: Sastha Prakash
Factual Text Source: Plaque in front of The Big Temple, BBC’s The Story of India, and other web sources.